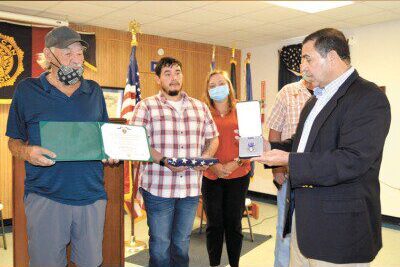 Louis Cantu of Floresville didn’t live to receive the Purple Heart he deserved for being wounded during World War II, but his son, Manuel, made sure the military decoration was awarded.

Louis Cantu enlisted in the U.S. Army in 1942 and was deployed overseas to fight in the European theater of operations. He was wounded in Luxembourg Dec. 3, 1944, when he was hit in the back by shrapnel from a German hand grenade.

The war was over for Cantu, who was sent to Puerto Rico to recover, according to his son. He then returned to his hometown — Floresville — where he lived the rest of his life.

Louis and his wife, Beatriz, had seven children, all of whom grew up in Floresville, where he worked as a painter.

However, about two years after Louis came home from the war, he felt pain in his left shoulder and upper arm.

“A piece of the metal [shrapnel] had moved around,” Manuel said. “It was removed from the muscle of his upper arm.”

Manuel learned that his father had been authorized the Purple Heart, but didn’t receive it because none were available at the time. His son, therefore, pursued obtaining the decoration — first established by Gen. George Washington in 1782 — through Cuellar’s office.

“We are proud of our father for doing this on behalf of his dad,” said Manuel’s daughter, Melissa Sendejo, before the Aug. 19 presentation.

Both Louis’ grandson, Manuel Cantu Jr., and great-grandson, Joseph Hinojosa Jr., said they were inspired by Louis to serve in the military themselves.

“He always said he was honored to serve our country,” granddaughter Betty Cantu Silva said of her grandfather.

Other members of Louis Cantu’s family, along with a large contingent of Post 38 members, attended the ceremony.

Be one of our donors!

Paid for by Texans for Henry Cuellar